I was initially disappointed when this hardback turned up in the post. I wasn’t convinced a book crammed with photos of young, sweaty guys gurning and flipping their middle fingers was something I’d want to look at very often. But I was missing the point. Bazillion Points are doing a great service to Metal with books like this. Harald Oimoen and Brian Lew were part of the Bay Area Thrash scene from the very beginning and Murder in the Front Row is a beautifully put together documentation of the movement as seen through their lenses.

Oimoen and Lew contribute written recollections of their involvement with the genre, along with contributions from Ron Quintana, Gary Holt, Alex Skolnick and Robb Flynn, but the main attraction is the atmospheric photography. Many historic moments and formative band line-ups are captured here. Metallica feature heavily. There are great shots of the Mustaine/McGovney line-up as well as the very first photos of the band with legendary bassist Cliff Burton. While Exodus’ importance in the scene is often overlooked, they are given the profile they deserve here and, mainly due the larger-than-life presence of frontman Paul Baloff, they embody the wild and chaotic vibe of the movement. They also provide the book’s title via the lyrics of their classic Bonded by Blood. 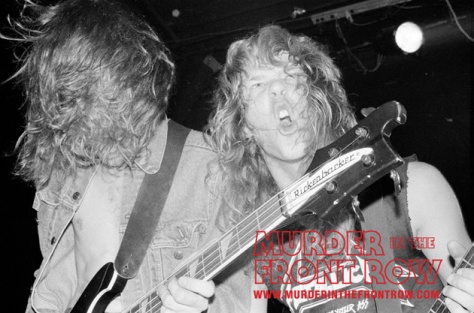 Being an LA band, Slayer’s earliest eye-liner days aren’t included but by the time they hit the Bay Area they were already a darker and more visually striking prospect. The images of their first Bay Area shows seem to leap out of the book and Oimoen was on hand to capture Kerry King’s short-lived stint as guitarist in Megadeth. His spike-wristed appearances in early ‘Deth shows provide some of most fascinating sights in the book. The early Megadeth shows also illustrate the changed attitude of Dave Mustaine: his determined, sneering demeanour speaking volumes about his intent following his dismissal from Metallica.

Alongside the obvious main players, the grassroots moments of many other crucial bands are also included along with plenty of backstage meetings, drunken antics and – a crucial element often overlooked by professional Rock photographers – fans like Toby Rage who illustrate (often in mid-air) the audience mayhem these bands became notorious for.

So, although on first glance this is a book of photos of young sweaty guys, the authors’ dedication to the genre and their candid amateur photography turns it into something more: a brilliant evocation of the blood, sweat and beers of a unique and vibrant scene. Murder in the Front Row is essential for fans of the genre: it tells the story of Bay Area Thrash Metal more effectively and honestly than a bazillion words ever could and is the next best thing to having actually been there.