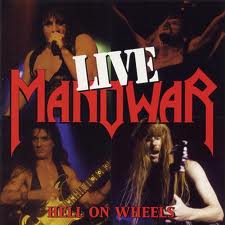 Strangely, for a band renowned for their live show and their tinnitus-inducing black wind of volume, it took a long time for Manowar to release a live album. Released in 1997, the New Yorkers’ long-awaited debut live release Hell On Wheels couldn’t help but feel a bit disappointing.

Selected from multiple dates, the album does a fine job of capturing Manowar’s punishingly loud live sound, with vocalist Eric Adams fighting to be heard amongst the din. It kicks off in powerful style with the iconic Orson Welles intro and the perennial Manowar. Fan faves like Kill With Power follow suit but the ill-conceived grouping of guitar solo, piano interlude and the cheesy ballad Courage kills the momentum too early in the proceedings. The superb Blood Of My Enemies and Hail And Kill put the show back on a triumphant track but Joey DeMaio’s overlong bass solo Black Arrows soon arrives to spoil the fun. With less time-wasting and mighty classics like Thor (The Powerhead) and Battle Hymn, the album’s second half is more enjoyable but there’s too much representation from 1996’s disappointing Louder Than Hell and songs like Return Of The Warlord and Carry On aren’t fit for their climatic positions in the set.

With 15 years of incredible material to draw from Hell On Wheels could and should have been so much better than this. With prudent use of the skip button there’s some great fun to be had but the album is marred by its padding and poor pacing. “Other bands play, Manowar kill” but Manowar’s first live album is poorly executed.