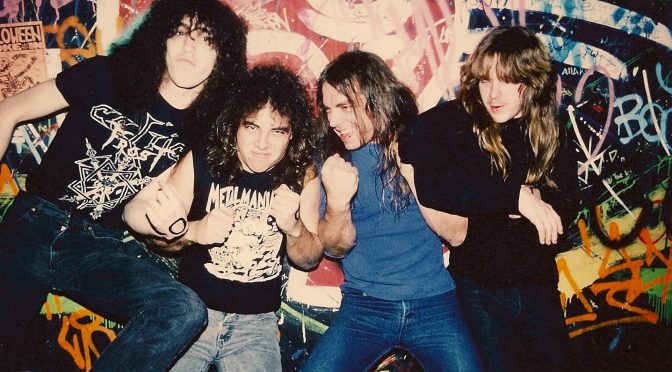 In 1989 the BBC documentary series Arena ran an hour-long episode called Heavy Metal. It was a huge deal for metal fans. Videotaped, rewatched repeatedly and quoted endlessly… “whooaa dugga dugga dugga!” There is a fantastic scene filmed in Nottingham’s Rock City nightclub where a circle of guys throw some unforgettable shapes to an amazingly hypnotic riff. Uncredited in the documentary, the source of this riff remained a mystery until years later when I heard the song Brain Death by Nuclear Assault.

Brain Death would be a pretty standard speed metal bash if it wasn’t for that riff kicking in at the 3.30min mark. There’s a quiet opening that builds up some nice dread and the chorus is instantly memorable but this song is all about the Nottingham Rock City mosh. A lot of bands might just play that kind of slower breakdown briefly before picking up the pace or launching into a guitar solo but Nuclear Assault ride it out for nearly 3 minutes, giving it that hypnotic intensity. And it gives you plenty of time to do some serious air guitar damage too. I love it and by the looks of the Nottingham Rock City footage, I’m not the only one. Whoaa dugga dugga dugga! 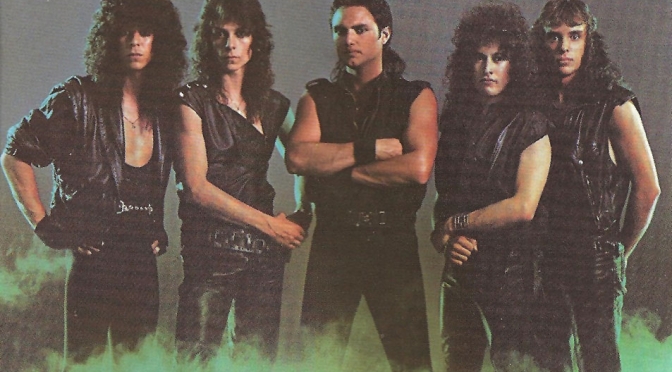 I was first introduced to Queensrÿche’s Prophecy via the live version on the Building Empires VHS, before acquiring the studio version as the bonus track on the CD reissue of the band’s 1983 debut EP. Nowadays you’ll find it as a bonus track on the reissue of 1984’s The Warning because it was written during that era but I’ve since discovered it wasn’t actually recorded until the sessions for their 1986 album Rage For Order! Bloody hell. But it doesn’t really matter because this song holds it own anywhere. It’s got the classy Rage For Order production sheen but its traditional melodic metal style fits in nicely on The Warning and the EP. Some extremely bouncy riffing, catchy hooks, nice vocal harmonies and some nifty and memorable guitar soloing from Chris DeGarmo and Michael Wilton make Prophecy a standout favourite… wherever you hear it.

Dio in his spectacular 80s live prime: explosions, lasers, crystal balls, knights, heraldry and a big fucking dragon! None of that on the CD version though… but have no fear! The music is just as spectacular. The band, including new guitarist Craig Goldy, breathe fire into the new material from the under-rated Sacred Heart album: King Of Rock N’ Roll is an explosive opener; Sacred Heart and Like The Beat Of A Heart are stately magnificence; and Hungry For Heaven and Rock N’ Roll Children are fun melodic anthems. The powerful band does a great job on the older Dio tracks like We Rock, Stand Up And Shout and Rainbow In The Dark too. In particular, the version of Don’t Talk To Strangers here is goosebump city: the best version of the track I’ve ever heard. Unfortunately, some of the other Dio, Rainbow and Sabbath classics get shoehorned into medleys, which are enjoyable enough but a bit frustrating. Especially when drum, keyboard and guitar solos are allowed to drag…on(!) for 18 minutes of valuable running time. So there’s both heaven and hell here for Dio fans. If you can find the sacred skip button, you’ll discover golden renditions of your favourites and fresh excitement from some lesser-heard treasures. Buy the live DVD too… it’s got a big fucking dragon in it!

Normally I would base a review of an album on more than three listens but after listening to W.A.S.P’s Inside the Electric Circus that many times this week, I’ve heard enough. The first three proper tracks on it (the title track, I Don’t Need No Doctor and 95-N.A.S.T.Y.) are the only ones worth writing home about. Fantastic howling, raunchy metal that makes you feel like this could be one of the most fun metal albums ever. The problem is, the rest of this album is mundane. It doesn’t do anything wrong exactly: this is no “hope you like our new direction” misfire. I love what W.A.S.P. did with their first two albums and this continues in that vein but it’s the sound of a band on autopilot. W.A.S.P. knew it too. After the supporting tour and live album (guess which songs from this made it onto that?) they changed tack, releasing the more serious and ambitious The Headless Children. If further proof of Inside the Electric Circus‘ mediocrity is needed: that cover. If you paid money to see an “Electric Circus” and got a dude in a cage wearing a tiger-print leotard and fake claws… you’d ask for a refund. Demand better.

The 1986 debut record of Sweden’s Candlemass casts the kind of pure Heavy Metal spell you’d expect to find scrawled in some dusty old grimoire found in a subterranean chamber. As well as giving the Doom Metal genre its name, the album’s title also describes its contents perfectly. Six ancient tales of myth, legend and tragedy told through Metal of portentous and quaking heaviness.

On Epicus… bassist and songwriter, Leif Edling, offers up a treasure-trove of timeless riffs, all heftily delivered by rhythm guitarist Mats “Mappe” Bjorkman, from the snaky, neoclassical riffs in Demons Gate and Crystal Ball, to the windswept bludgeon that opens Black Stone Wielder and the Am I Evil-esque riff that fires up Under the Oak. In addition to the lumbering guitars, the album’s acoustic passages and doleful harmonies add a bleak, gothic atmosphere.

Vocalist Johan Längqvist’s baritone is sincerely and chillingly emotive: anguished in funereal opener Solitude and channelling some arcane evil in Crystal Ball. He tells all of Epicus’ tales with theatrical flair and melodrama. Lead guitarist Klas Bergwall provides chinks of light and a very European flavour with his lyrical, neo-classical leads and drummer Matz Ekström proves to be the album’s secret weapon, filling the gaps between snail-paced chords with massive fills that sound like the raging elements. 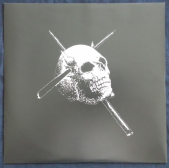 It’s surprising, considering the musical chemistry and cohesiveness, that Candlemass wasn’t really a band at this point. They had been signed to France’s Black Dragon label on the strength of Edling, Bjorkman and Ekström’s demos. Längqvist and Bergwall were hurriedly drafted in for the album’s recording sessions but were uninterested in joining the band on a more permanent basis and after the recording finished, Ekström left the band too. Despite a positive critical reception, Epicus… sold poorly but the next line-up of Candlemass would record another masterpiece that helped boost the reputation of the band, sending many back to the debut.

The legend of Epicus… would grow in stature over time, becoming a mainstay of best-album polls and increasingly cited as an important influence by other bands. While forever associated with its titular sub-genre, it’s a timeless, magical classic for Metal fans of all stripes and still casts a powerful spell to this day.