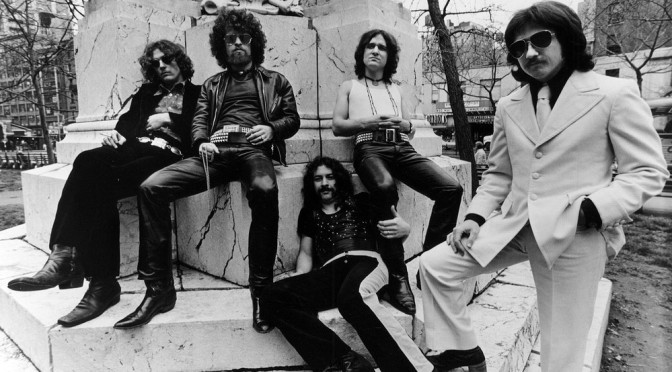 Secret Treaties is the last and best of the so-called “black-and-white” trilogy of albums that kicked off Blue Öyster Cult’s career: a trio of mysterious, monochrome-covered rock albums that peaked with this 1974 release. It’s dark, esoteric and also a bit of a hoot. It’s an album of parodic garage-rock horror reminiscent of Alice Cooper’s Killer, full of psychedelic monster mashes like Career Of Evil, the oddly cute Cagey Cretins and the seismic, psychotic Harvester Of Eyes. And those aren’t even the best tracks. Overdriven boogie rocker ME262 puts you in the pilot’s seat of a Junkers Jumo 004 (“Hitler’s on the phone from Berlin, he’s gonna make you a star”) and Dominance And Submission has a superb, swinging groove, an unforgettable climax (“radios appear”) and some creepy interjections from Charles The Grinning Boy… “it will be time”. But the album truly peaks with its closing tracks, Flaming Telepaths and Astronomy. Both are grand, magnificent masterpieces with affecting muscianship and beautifully cryptic imagery. Astronomy in particular is a complete head-scratcher. I’d love to know what “the nexus of the crisis, the origin of storms” really means but then… I feel like not knowing is kind of the point. And the reason Secret Treaties remains so eternally fascinating and alluring.