They might have released two stone-cold classics in 1980 but Saxon weren’t about to put their feet up. The New Wave of British Heavy Metal was now in full flow and Saxon were clearly unwilling to relinquish their position as the commercial hot property of the movement. Released in 1981, hot off the back of their considerable success the year before, Saxon’s fourth album Denim and Leather was a celebration. Not just of the band’s success but of their fans and the resurgent metal scene as a whole.

Produced by Nigel Thomas, Denim and Leather is less abrasive than the previous albums but still sonic meat and potatoes. It’s topped and tailed with two of the greatest songs Saxon would ever produce. Continuing their penchant for offbeat lyrical subjects and songs about forms of transport, opening track Princess of the Night tells the tale of a steam train delivering mail through ice and snow. (You’ll have to suspend your disbelief at a British train actually running during such inclement weather). It’s a darting, precision rocker with a riff you can’t believe no-one thought of before and a joyously bluesy guitar solo from Paul Quinn. Closing track Denim and Leather is a genuine and charming tribute to the metal fans that put Saxon on the map, highlighting the band’s down-to-earth attitude. It’s a stomping anthem with a huge and irresistible chorus and one of the most memorable opening lines in metal history: “Where were you in ’79 when the dam began to burst?” 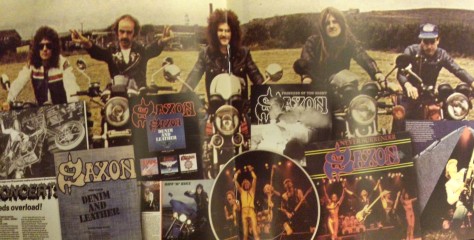 After the superb opening the first side is a mixed-bag. Never Surrender is vintage Saxon and follows Princess of the Night in bruising style but the quality starts to trail off. Rough and Ready is a stodgily unconvincing hard-man boast and Play it Loud is a flat stab at a party anthem. Side 2 immediately gets the album back on track with And the Bands Played On, another of the album’s outstanding victories. Despite its musical similarity to 747 (Strangers in the Night) it has its own unique identity and appeal: a feel-good ode to the inaugural Monsters of Rock festival at Castle Donington. As with the title track, Saxon’s everyman charm works wonders: rather than singing about how amazing their own performance was, they celebrate the festival itself, the attending horde and name-check other bands on the bill. It’s got simple, memorable guitar riffs and Biff Byford’s breathless delivery is a joy “Will it rain, will it snow, will it shine? We don’t know” and it’s one of those classics you never tire of hearing. Midnight Rider continues the musical lap of honour, recounting the band’s early tours of the States with the rolling tempo and gear-changing chords perfectly capturing the excitement of the road trip. The album’s most ripping number, the apocalyptic Fire in the Sky, and the triumphant title-track finish the album on a high.

Along with Wheels of Steel and Strong Arm of the Law, Denim and Leather is often thought of as the third in Saxon’s “classic trilogy”. As is often the case with trilogies, the final part is the weakest of the three but it’s still a must-hear with some of the band’s most accomplished songwriting and the guitar duo of Graham Oliver/Paul Quinn at a lively peak. The highlights are magnificent metal classics and far outweighs any filler to elevate the album to star status. It was their second highest charting album in the UK so Saxon’s position at the head of the NWOBHM pack remained secure and just two years on from their debut release they already had a discography and a following worthy of celebration. The dam was well and truly burst.