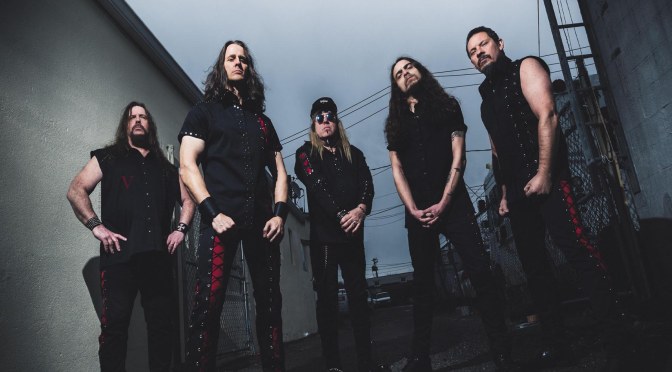 Riot’s history as a band is the stuff of metal legend, thanks to decades of perseverance through bad breaks and tragedy. But musically I’ve been largely unfamiliar with the band’s career beyond the early Guy Speranza-fronted albums of the late 70s/early 80s. With the passing of founding guitarist Mark Reale in 2012 there is now no-one left from those early days. But the US band, respectfully renamed Riot V due to Reale’s passing, have vowed to carry on his good work.

And on their latest album Armor Of Light they do a pretty good job of it. Like a more polished version of 1988’s Thundersteel, it’s upbeat melodic power metal akin to Gamma Ray or Dragonforce. Todd Michael Hall’s soaring Kiske-esque vocals deliver some instantly memorable choruses with high-flying aplomb. Songs like Victory, End Of The World, Heart Of A Lion and Angel’s Thunder, Devil’s Reign sound like the sort of warring, singalong stuff that will go over a storm at festivals. The guitar soloing is superb too: jousting, harmonized Helloween-type stuff.

But there isn’t quite enough killer riffing here, and it all starts to go through the motions in the second half. The band is too content to chug along with the double-kicks, and many potentially interesting parts are drowned out by the relentless drums. But there’s good pure metal fun to be had here. The first side is a blast, I guarantee you a good two or three songs that will instantly embed in your brain and warrant further listens. A solid effort rather than a great one; but if the goal is to uphold the legacy of Reale and Riot then it achieves its aim. I definitely want to catch up and hear more.