“Before they bring the curtain down”

I’ve listened to Badge a gazillion times now and it’s never lost an ounce of its power. It’s the track that got me into Cream, or to be more precise, its the bridge that got me into Cream. The main song is wonderfully summery but when it reaches the bridge and Eric Clapton’s Leslie-speaker guitar arpeggios chime in, it’s one of the most emotionally moreish sounds in rock history. It was co-written by Clapton and his Beatle pal George Harrison for Cream’s farewell album Goodbye and although the relationships in Cream had turned sour by that point, the band put in a great performance. Especially Jack Bruce, who excels with his bouncy, melodic bass line. Shame they couldn’t have held the band together as this is brilliant stuff and I find their catalogue, short though it is, increasingly revealing and rewarding over the years. But Badge still ranks as the cream of the crop. 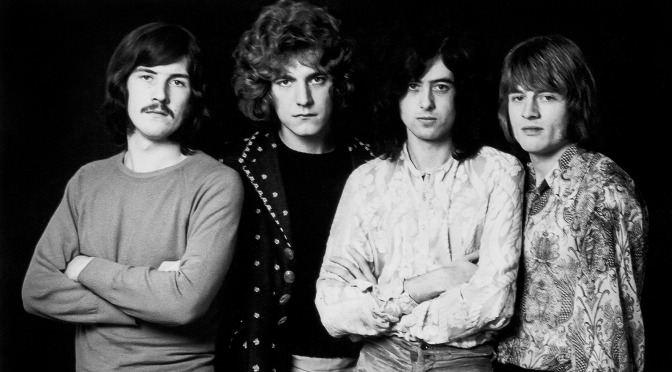 I didn’t mention Babe I’m Gonna Leave You when I reviewed Led Zep’s debut platter. It didn’t swing my verdict one way or the other. It’s not the best song on the album and it’s not the worst. But I was listening to Led Zeppelin again today and a lot of the album’s characteristics are summed up in this one song. It’s a great example of the album’s light and shade, folk and rock. A lovely acoustic part alternates with a cool heavy part where Boaby “Robert” Plant lets rip with roaring vocals. But it’s also a great example of why I got so bored of the album so quickly. The light and heavy parts both have the same chord progression which means this overlong song doesn’t feel like it’s going anywhere. And neither does the narrator. By the end of the tune, no-one has left anyone. After the 17th-or-so “baby” I’m the one getting itchy feet.

They would go on to enjoy insane, enormo-success and an inflated reputation as the One Band To Rule Them All but Led Zeppelin’s first flight was a rickety, low budget affair. Their S/T 1969 debut album was knocked out in just 36 hours for less than two grand, which is not bad going considering it became a seminal work in the early history of “heavy”. Before Black Sabbath and before In Rock, Led Zep dished out dark, powerful riff-based rock on tracks like the bewitching Dazed And Confused. But there are both good times and bad times to be had on Led Zeppelin. Communication Breakdown is a superb proto-Paranoid metal chug but Good Times, Bad Times‘ powerful rhythm section and Your Time Is Gonna Come‘s dreamy mix of acoustic guitar and organ can’t disguise the band’s dated, hippy songcraft. Elsewhere, the famously sticky-fingered Brits resort to mining other artists’ material. This approach works well on tracks like How Many More Times, where Zep supercharge the blues with swingingly heavy results. But it also results in stodgy workouts like I Can’t Quit You Baby and Black Mountain Side, a folk arrangement that shows good taste but lacks imagination. The album’s thudding rock power makes Led Zeppelin a notably heavy debut but it’s also heavy in mood: a monochrome moroseness that, mixed with some weak and old-fashioned material, makes repeat listens an increasingly dreary experience. Better would come when Zep’s creativity and vision caught up with the power of their delivery.