“Through you I was so inspired”

One of the coolest Scorpions tracks ever. We’ll Burn The Sky‘s lyrics were penned by Jimi Hendrix’s last girlfriend Monika Dannemann, who was dating the Scorpions’ guitarist Uli Jon Roth. But weirdly, it wasn’t the Hendrix acolyte Roth that co-wrote the song with her. Move over Roth… and let Rudy take over! The Scorps’ other guitarist Rudolf Schenker put the lyrics to great use as an icy, eerie metal ballad with nice dreamy bits but also lots of electric and angular metal chonk. Not to be outdone, Roth makes his presence felt with plenty of stellar shred. Classic, state-of-the-art stuff for 1977. But ‘scuse me while I… burn this guy? Did they learn nothing from Hendrix?! 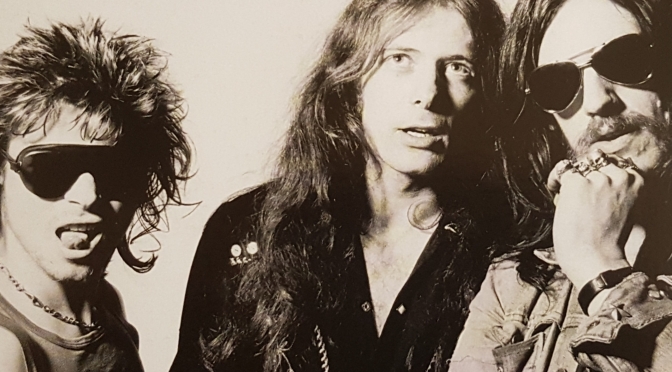 The legendary Lemmy/Philthy/Fast Eddie lineup of Motörhead roars into life on their 1977 self-titled debut, sounding every bit the skint, pissed off, ne’er-do-wells they were. Over 40 years later Motörhead is still an impressively belligerent noise. It captures the band at the point where they were dubbed “the worst band in the world” (and couldn’t have cared less). The title track is a thunderous biker anthem and Iron Horse/Born To Lose, White Line Fever and Keep Us On The Road are low-down and mean rackets. The band’s everything-louder-than-everything-else chemistry is already thrillingly volatile but the hurried recording sessions didn’t allow much time for writing. So there’s a reliance on old songs from Lemmy’s stint in Hawkwind and songs from a formative and short-lived earlier lineup of the band. Which means Motörhead ends up more trippy, dated and ponderous than later albums where the band would truly gel: mixing their wide range of influences into a seamless Motörmusic. But it’s a great and important debut: an obnoxious, warts-and-all album that set a new standard in loud, dirty, fuck off rock n’ roll.