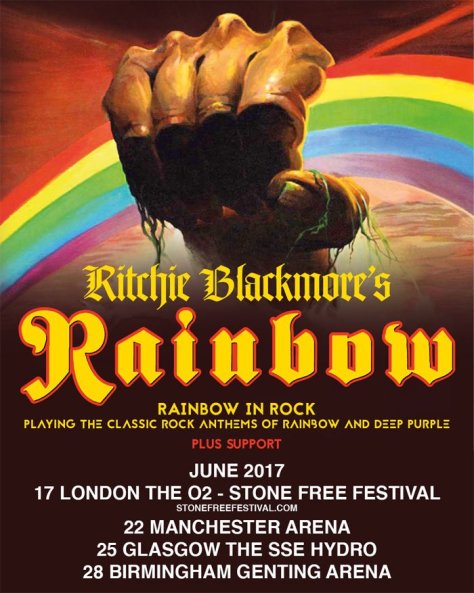 I finally made the sacred pilgrimage to see The World’s Greatest Guitarist®. My expectations had been lowered after seeing the enjoyable but sluggish Memories In Rock footage and then hearing the banal single released a few weeks back but… Ritchie F. Blackmore! It was incredibly exciting to know I was finally going to, not just see him play live, but see him play rock.

The band’s recent recording of Land Of Hope And Glory played over the PA before the “we must be over the rainbow” sample heralded the band’s arrival on stage. Opening with HMO fave Spotlight Kid rather than Highway Star was a good move. Blackmore played tentatively and awkwardly but come the closing outro of the next song I Surrender he was warming up. He was taking some shortcuts in his lead and rhythm playing throughout the night but given his age (and arthritis?) it’s unfair to expect the intensity of his youth. He still played well and had that mercurial, unique quality. It was great to hear his instantly recognisable guitar voice in person.

The band was good too. A definite improvement on the 2016 footage/recordings with a much more convincing performance from the rhythm section in particular. Ronnie Romero was in superb voice and an entertaining, personable frontman. He suits some songs more than others but he was impressive all night. He’s a huge talent and a great find.

My only quibbles were an interminably long keyboard solo and some overly shrill shrieking in Child In Time, a song I can’t be arsed with at the best of times anyway. And, although it’s good to hear Blackmore playing them, I wasn’t too fussed about hearing other Purple stuff like Black Night and Smoke On The Water either. That said, some of the sets best moments came from the Purple albums: a stunning version of Burn and a very moving Soldier Of Fortune. The Rainbow selections were similar to previous shows with the welcome addition of I Surrender, All Night Long and a hugely unexpected and wonderful Temple Of The King. But the mighty Stargazer remains the absolute standout track of the set: epic metal bliss delivered with deadly conviction by Romero. Goosebumps.

Ultimately, I went to see a guitarist whose music and playing I have obsessed over for years. And I was not disappointed. In fact, I was often thrilled and excited. That’s pretty good going. Age and arthritis be damned, Blackmore is still the man.