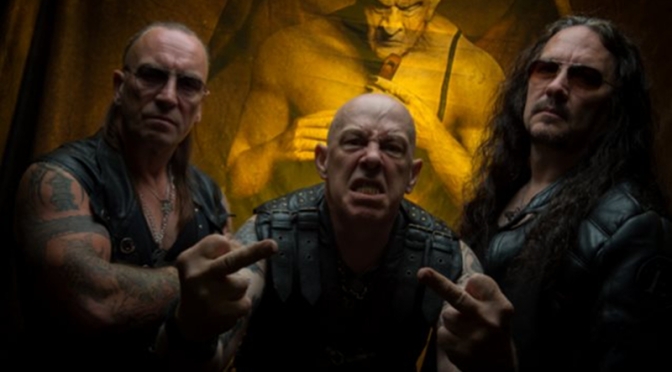 While the actual Venom continue under the leadership of infamous bassist/vocalist Conrad ‘Cronos’ Lant, the return of the band’s classic guitarist Jeff ‘Mantas’ Dunn and drummer Tony ‘Abaddon’ Bray as Venom Inc. has caused quite a stir. Surely two thirds of the band’s massively influential and legendary formation is better than one? And to cap it all off, the band has been rounded out appropriately and authentically with Prime Evil-era bassist/vocalist Tony ‘Demolition Man’ Dolan. It’s an exciting unit and the band has been going down a storm touring a classic Venom set. But playing live oldies is a no-brainer. Now the real test comes as the band offer up their first new material with their debut album Avé.

Venom Inc. perform like heroic metal veterans throughout. Mantas in particularly impressive form, peeling out genuinely thrilling guitar solos like it’s a piece of piss. They’re too seasoned to play with the filthy, bulldozer energy of old but as gutsy, trad metal goes much of this is hard to beat. It’s also hard to stick with. Songs like Avé Satanas and Preacher Man are average songs stretched way beyond their breaking point and, while it works better as an album track than as a single, Dein Fleisch causes a hefty lull at a crucial point.

With those three totally removed Avé could have been easily and massively improved, while coming in at the golden running time of 40min too. Ace biker metal tracks like Forged In Hell and The Evil Dead would get old heads banging again and raging thrashers like Metal We Bleed and Time To Die would give young Venom-worshipping upstarts like Midnight a run for their money too. But, as a complete listening experience, Avé is overlong, uneven and frustrating: the two thirds of Venom Inc. proving that it is possible to ‘ave too much of a good thing.