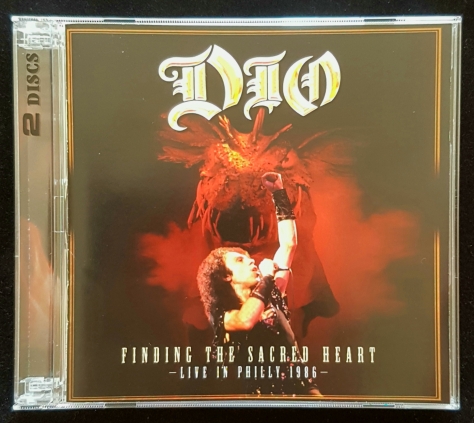 Dio in his spectacular 80s live prime: explosions, lasers, crystal balls, knights, heraldry and a big fucking dragon! None of that on the CD version though… but have no fear! The music is just as spectacular. The band, including new guitarist Craig Goldy, breathe fire into the new material from the under-rated Sacred Heart album: King Of Rock N’ Roll is an explosive opener; Sacred Heart and Like The Beat Of A Heart are stately magnificence; and Hungry For Heaven and Rock N’ Roll Children are fun melodic anthems. The powerful band does a great job on the older Dio tracks like We Rock, Stand Up And Shout and Rainbow In The Dark too. In particular, the version of Don’t Talk To Strangers here is goosebump city: the best version of the track I’ve ever heard. Unfortunately, some of the other Dio, Rainbow and Sabbath classics get shoehorned into medleys, which are enjoyable enough but a bit frustrating. Especially when drum, keyboard and guitar solos are allowed to drag…on(!) for 18 minutes of valuable running time. So there’s both heaven and hell here for Dio fans. If you can find the sacred skip button, you’ll discover golden renditions of your favourites and fresh excitement from some lesser-heard treasures. Buy the live DVD too… it’s got a big fucking dragon in it!